The National Dance Company Wales is to grace our UK stages this year with their Spring Tour – a trilogy of contemporary dance pieces choreographed by some of the biggest names in the business, created in Cardiff itself.

Quixotelands, Romance Inverse and By Singing Light make up this year’s triple bill, with the company performing two of the pieces on offer at each venue. Quixotelands, by Gustavo Raminez Sansano, and By Singing Light, by Stephen Petronio, was the line up for the preview of the NDC Wales’ Spring Tour, performed at the Dance House in the Wales Millennium Centre.

'By Singing Light' by Stephen Petronio, performed by NDC Wales

For those who hold the opinion that Wales has nothing to offer as far as contemporary dance is concerned, think again. NDC Wales put on a performance which is enrapturing and simply beautiful, with a performing cast of 11 undeniably talented dancers.

Quixotelands is a contemporary interpretation of the classic Don Quixote by Cervante. Through impeccable storytelling, the cast spins a tale of two lovers, wrapped in black comedy and farcical entertainment. Sansano’s style is frantic, quirky and frenzied, incorporating writhing movements which almost defy human ability.

It is this piece which really demonstrates the technical ability and chemistry of the group, who not only perform the awkward, clumsy movements in perfect unison, but also interact with a pantomime charm which not only tells an entertaining story, but compliments the quirkiness of the piece perfectly.

However, the spectacle of Quixotelands is in the final scene – a spine-tingling pas-de-deux between the two lovers, featuring intricately choreographed partnerwork and intertwining movements. Through effortless lifts, writhing floorwork and expertly executed canon the sequence merges two dancers into one, creating a piece which is visually engaging. A delicate intensity and a believable on-stage rapport beautifully reflects the euphoria and emotion of the early days of a relationship, leaving you positively lost for words.

By Singing Light is of complete contrast to Quixotelands. A dance response to the poetry of Dylan Thomas, the intensity and drama of the piece is of dizzying heights, setting your nerves on edge and leaving you completely enthralled. 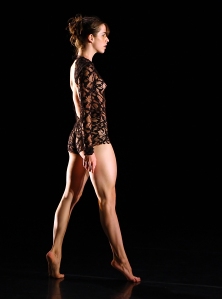 Performed to music composed to Thomas’ poetry – parts of his poetry even sung – the cast perform a 25-minute spectacle of contemporary dance. Gravity-defying lifts are carried out with a grace and ease which can only be demonstrated by an extremely able set of dancers, as they move seamlessly and organically from one structure to the next – all of which have an intricate architectural quality.

In this piece, the cast really work as a unit – each individual is regarded as an equal, with no distinction between sex or build. Particularly impressive are the male partnerships in the performance, which demonstrate masculinity and strength with a grace which rivals any female member of the cast.

Trainee newspaper journalist at Cardiff University as part of the Journalism PGDip course. Graduated from the University of Birmingham in 2010 with a degree in German Studies. Interested in arts and culture, particularly dance - would love to review dance and musical productions for a publication in the future. If you would like to be reviewed for the blog, or have any dance-related info you would like to share, email me catrinshi@gmail.com or tweet @catrinshi. Thanks! END_OF_DOCUMENT_TOKEN_TO_BE_REPLACED
This entry was posted on Monday, January 24th, 2011 at 2:39 pm and tagged with By Singing Light, Don Quixote, Gustavo Raminez Sansano, NDC Wales, Quixotelands, Stephen Petronio and posted in Choreographers, Contemporary, Performances, Professionals, Review. You can follow any responses to this entry through the RSS 2.0 feed.
« Capturing Cardiff – how the dance scene is surviving budget cuts
RAD, ISTD and IDTA to launch first Dance Proms at the Royal Albert Hall »